Milford Buchanan and the Shelburne Dory

Five years ago I stopped in at the Shelburne Museum Dory Shop in Nova Scotia. I met Milford Buchanan and we spent a few hours working on a dory. He builds a Shelburne style Banks Dory, which has subtle differences from the Lunenburg and Salisbury dories--the makers of each style quite certain that theirs is the one proper way to build them. 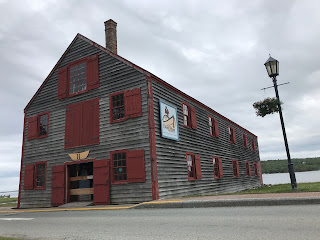 At the time, Milford had a couple helper/apprentices, but both were older than he, and neither were likely to carry on the process should Milford pass on someday. This year I decided to see if it would be okay for me to go back up and try and get a bit more of his story. Yes, was the response. Come on up.

Milford had a floor glued up and ready to go when I got there. We set in immediately, using the ancient wooden patterns to lay out the shape of the floor and cut out a great 15 foot long, 3 foot wide lozenge of 1" pine. We then used more old patterns to lay out rib parts, transom, stem, and circle board. 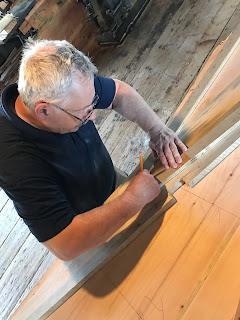 We cut them on the old 1920s vintage Crescent Universal Wood Worker. It is belt driven with a venerable electric motor, and consists of a 32" band saw, a table saw, a jointer, a router-table, and hole borer (horizontal drill press)--the original Swiss army knife of stationary tools. Milford informed me that this was a new acquisition--that they didn't have that until the shop got electricity back in 1920. 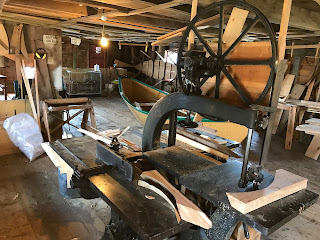 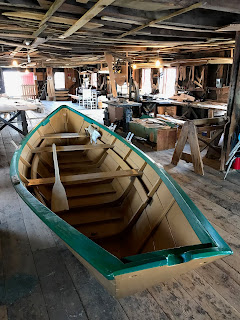 And a nest of three. They were built to be nested five or six deep on the decks of schooners, sailed out to the Banks, and dropped overboard where teams of two could trawl for cod. 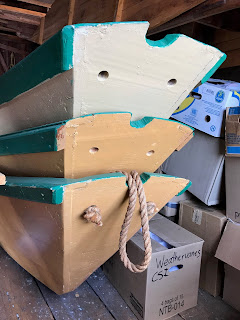 This boat was built by one of Milford's predecessors, Sidney Mahaney, who built dories here for over seventy years. 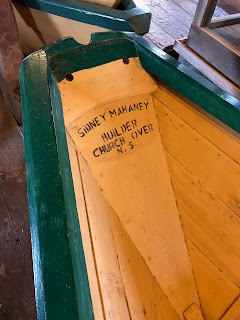 This is the cradle or "building horse" that has birthed something like 50,000 dories in its 130+ years. 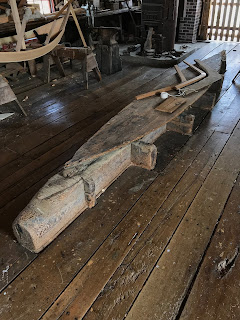 A pattern for the "circle board", which goes near the top of the inner face of the transom. 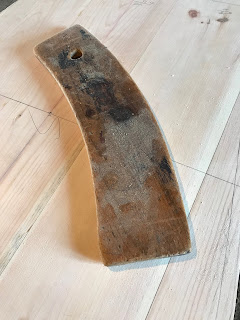 Milford peening on the patented clips, invented here in Shelburne in the 1800s, that allowed them to build rib sections out of short straight pieces of oak rather than have to find natural grown oak or hackmatack tree roots to form the curve. This invention doubled production. 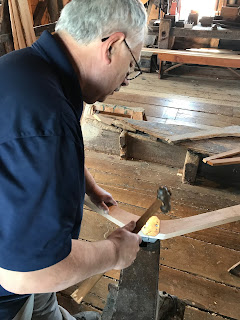 In the off season Milford is the king of Shelburne whirligigs--made in the shape of dorymen, lobsters, sailboats and so forth. 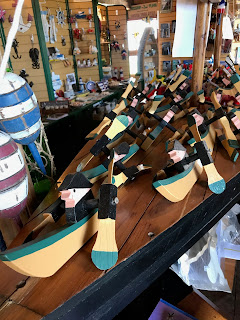 Once we got the "skillet" together--meaning the bottom, ribs, transom, and stem--it was time to begin planking her. 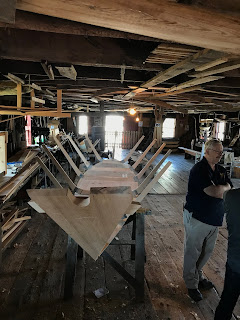 Checking the ribs and bottom for proper bevel, so the strakes won't leak. 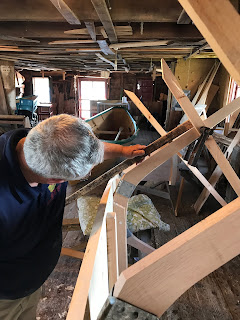 Cotton candlewick, comprised of about five strands, gets tacked on before the strakes are attached to help seal the seam. 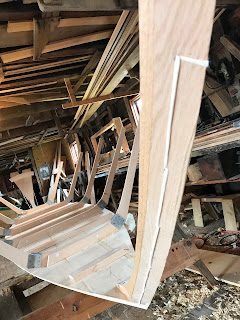 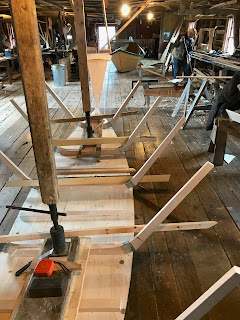 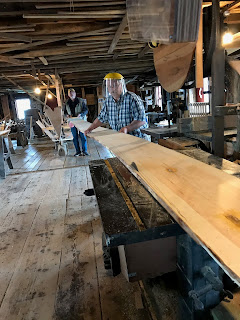 Mick, one of Milford's regular volunteers, got back to town a few days after I did. About ten years ago he visited the shop, volunteered to help, and ended up buying a home nearby. 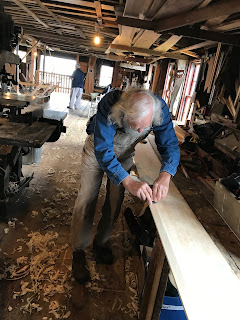 Meself working on one of the bevels. 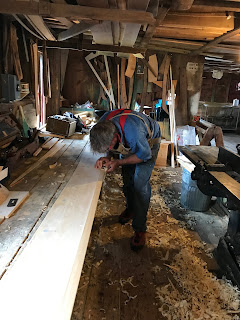 We got the garboards fit and fastened and were fitting the next strake when my clock ran out. There's a lot more to this story, but it looks like it may be a magazine article, so stay tuned. 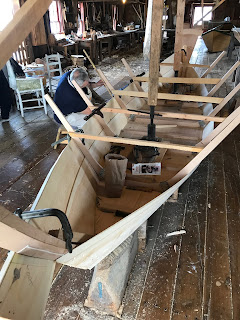 Before I left we took one of the boats out for a spin. They scoot along pretty good, but like all dories, could use a bit of low ballast for stability. 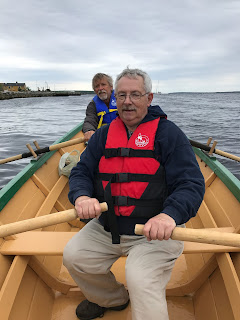 On the way home I stopped to visit the Lunenburg Dory Shop, but no one was home. 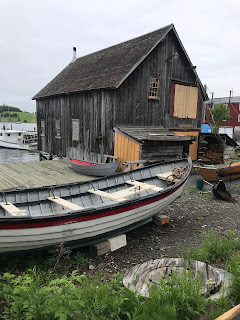 Then time to catch the ferry back to the USA and teach a course building a Grand Canyon Dory. No rest for the wicked. 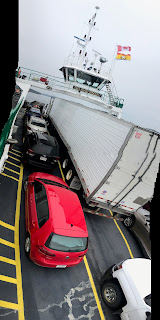