I just got word that the great boat designer and boatbuilder Jerry Briggs passed this month at 86. His iconic Grand Canyon Dories, built between 1971 and 1982, carry on his legacy in beauty and style. He set the bar so high we've never been able to equal it--only emulate it. Row In Peace, my friend. 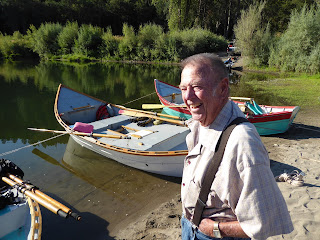 Here is a notice from his family:


Gerald 'Jerry' Briggs
Gerald "Jerry" Briggs, age 86, of Grants Pass, died Feb. 1, 2019, in his home of natural causes.
He was born in Grants Pass in 1932 to Elmer Briggs and Nellie Briggs (Stone). Jerry was a wooden boat builder. He was the designer and manufacturer of the Rogue River Special drift boat that evolved from the early design wood plank row boat his father built. Elmer rowed and pike-poled this boat on the Rogue River. Jerry continued his father's river guide and outfitting business, adding a boat shop, which is still a successful business run by his son-in-law, Bret Clark, and daughter, LeeAnn Clark.
Jerry advocated tirelessly to keep Oregon rivers publicly accessible. He was a proud and active member of the Oregon Guides and Packers. He was hired by a Grand Canyon outfitter to design a dory to run the canyon. This craft was completely deck-over and had a self-bailing feature. These dories are still the first choice for Grand Canyon guides. Jerry also built the early Hellgate jet boats for Grant Garcia, his friend and founder of Hellgate Jet Boat Trips. He and Grant raced hydroplanes in the very early days, when hydroplane racing was started.
Jerry was an active member of city and county government, often at council meetings, standing up for the rights he believed in for this community. He was an active member of the Grants Pass Chamber of Commerce, the Rocky Mountain Elk Club and an NRA supporter.
Jerry loved to hunt, fish, dig clams, find wild mushrooms, garden and raise beef cattle. Finding much joy in preparing and sharing these items with his family and friends.
He was a veteran of the Korean War.
Jerry is survived by his family, Genesse Dyer, Barbara Briggs, Bret Clark, LeeAnn Clark, Lori Briggs, Karli Lewis and Joe Lewis.
No funeral services to be held, fulfilling his wishes.
Posted by brdfrd at 7:21 AM No comments: Links to this post

This restoration stuff starts to run into a bit of money. Fortunately my friend Cort just send me a big bag of boatmen's bucks. 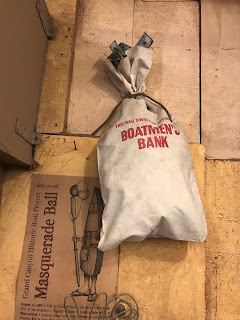 The Avery ladies came by a few times to work on the last of the bookshelf boat fleet. It's nearly done. 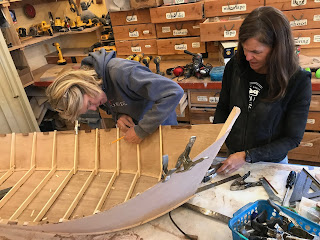 Up at the house, Secret Handshake opened a house concert. 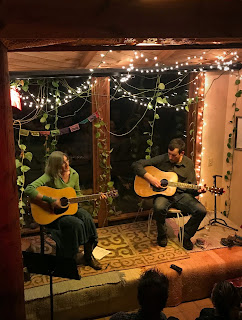 Followed by the lead act, Growling Old Men. Such wonderful music all evening. I think the house loves to soak up those vibrations for later. 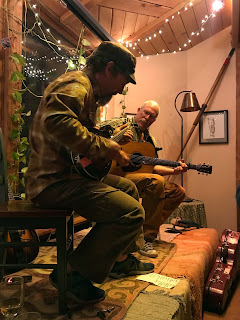 And I made a run to Apache Junction to give a lecture. According to my careful calculations, I was speaking to approximately 50,000 years' worth of humanity.

And back to work. With the hull stabilized we began framing it the hatches. I made a tough call on the accuracy of this restoration. The original side hatch lids were in the middle of the long side hatches. This meant they could not be opened with passengers onboard, leaving the boatman with nowhere to put things. And the hatches were very awkward to get gear out to either end of them. I went ahead and added a bulkhead, making two hatches out of each side hatch--a cargo hatch under the passengers, and a boatman's hatch to the rear of that. 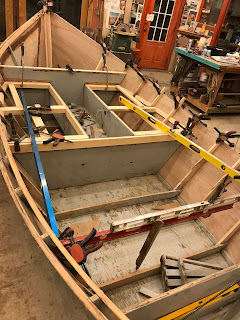 Sometimes you just have to show those rusted in bolts who's boss. 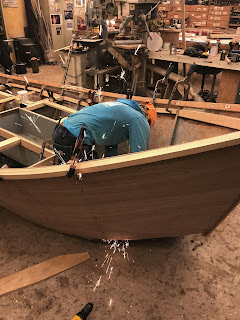 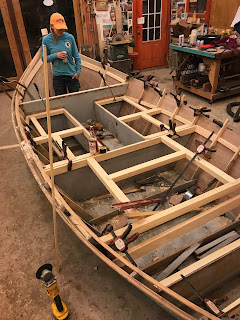 The magic of storyboard spiling. 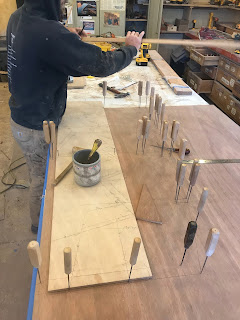 On with the decks. 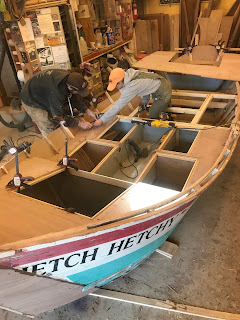 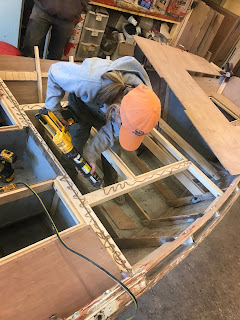 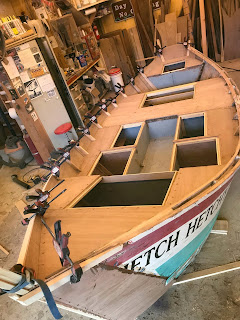 And for the final mystery, off with the floor. What terrors lie within? 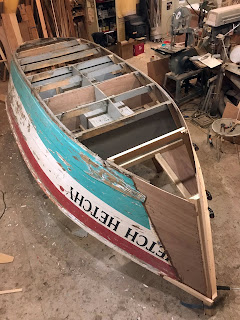 The boat looks pretty good, but the floor, which I'd really hoped to save with a few small patches, had a terminal case of the nasties. For about a foot in the center of the boat, the center ply of the plywood had failed. See all that black stuff? But the outer plies were fine on both sides. Deal breaker. Can't fix that. By the time we scarfed in a whole new center section and new ends, there wouldn't be much left but joints. The bummer is that is was defective plywood, not boat damage. If it had been good material to start with we could have kept it. 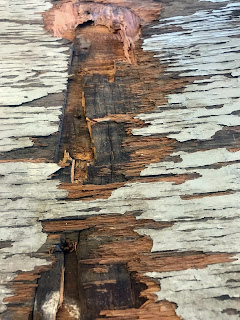 And here's a cool thing. The chine had been smashed in at some point, so they just filled in the entire depression with MarineTex and painted it. MarineTex is still available. Scary weird stuff. It comes in two containers--a gray putty sort of stuff in a big metal can, and a clear jar of amber colored gel. When you open the gel it starts visibly vaporizing. Freaky. Also it's super heavy and extremely brittle. Not really the best thing for patching wooden whitewater boats. But back when I worked for Martin Litton, we used tons of it. 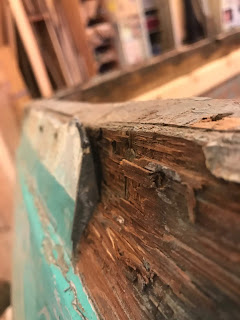 Okay, new floor it is. 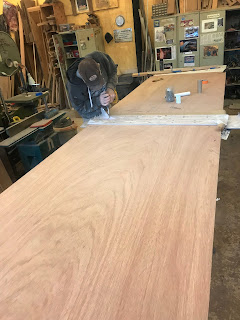 Off with a dozen layers of old paint. 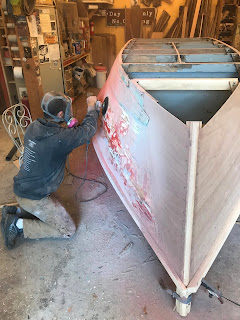 Patching a bad spot in the side. Love those reach-around clamps. 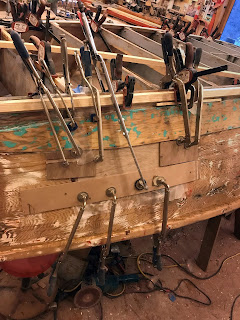 Yesterday we finished truing and straightening the ribs. Tomorrow we put on the new floor. 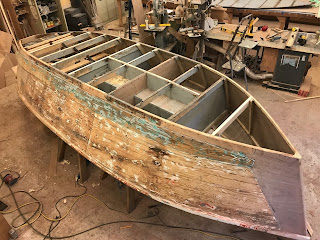 The old floor has got to be good for something. How about a billboard? 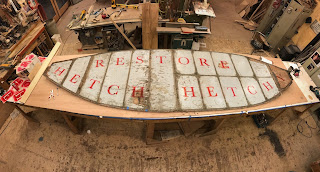 I'll drink to that. 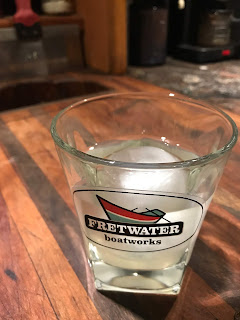 Posted by brdfrd at 7:45 PM 2 comments: Links to this post