Whatever I did in early December to irritate the trucking company who is allegedly hauling my cedar from Vermont, it was profound. After a long dormant period in a cold Vermont shipping yard, the planks have been on a slow tour of the United States, getting as far west as Chino, California last week. Last I heard it was headed for Phoenix, so there is hope I will see it this year.

The good part is that I have been able to spend weeks in my obsessive compulsive manner, finishing off the shop—building and filling a woodshed to heat the place, detailing the doors and windows in pumpkin colored trim, building a rack of drawers to get the tools off my bench, sorting, filing, organizing. It will make the boat project so much more pleasant. 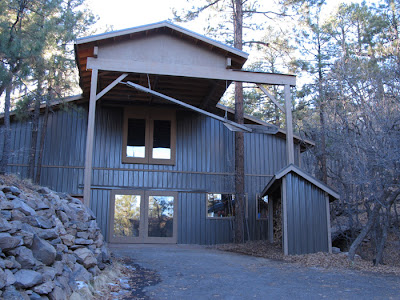 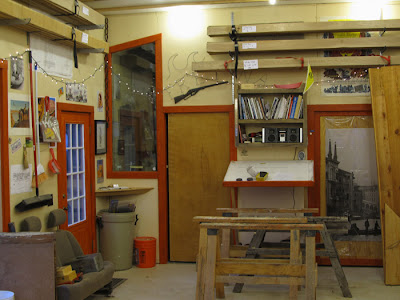 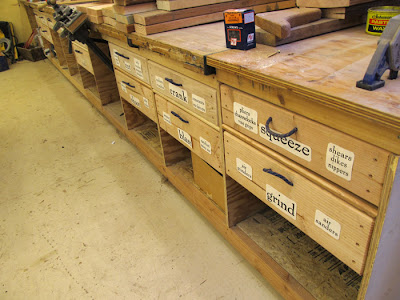 Posted by brdfrd at 9:13 PM No comments:

Last Thursday Dan and I drove to South Rim to visit the original Edith in her warehouse home. Kind of like a nursing home, where she doesn't get out to socialize, but just sits there on her gurney next to her kin awaiting some eventual fate. We studied, inspected, and analyzed joints, techniques, and placements, photographing as we went. Hopefully a lot of the questions we failed to ask will be answered by details in the photos we took. The most interesting thing I noticed was the details of the lapstrake--normally the end bevels just fade to zero in one sweeping bevel. On the Edith, the end bevels are a stepped angle. Looks pretty difficult to do. They must have had a custom plane to do it, I am thinking.
She's got big sealed tin boxes in either end to keep her afloat when the hull is ruptured. Apparently this worked, as Emery certainly did rupture the hull and still got it to shore. I'd post Kolb's pictures of that, but they are copyrighted. Here's a link, though
Big wreck at Waltenburg
And a few shots of our visit: 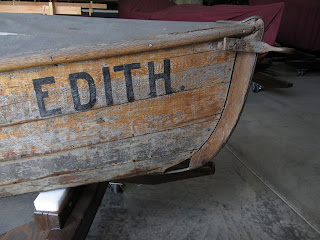 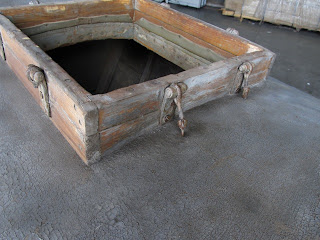 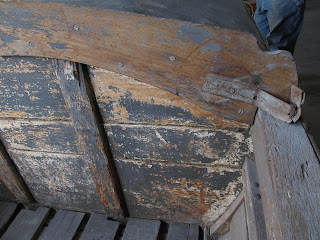 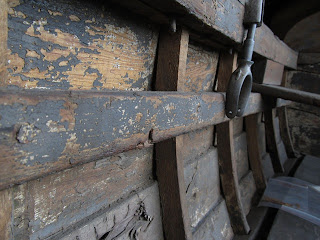 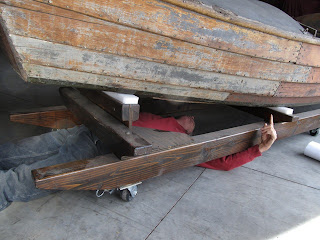 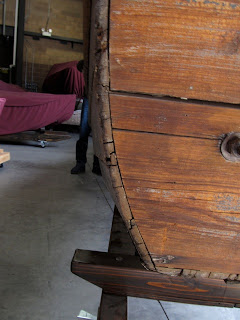 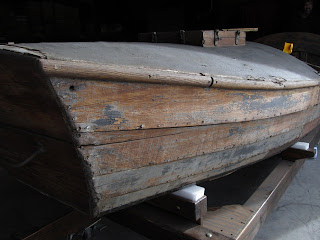 Posted by brdfrd at 9:41 AM No comments:

As the boat project progresses, I'll be referring a lot to the Kolb Brothers. If you want to know more about them, here are a few fun links.


The Steiger brothers' documentary on the Kolbs
The Grand Canyon Association's site about the Kolbs and their studio
Posted by brdfrd at 10:34 PM No comments:

Well, I'm committed. Or should be. Just received the first half of the lumber for a replica of Emery Kolb's EDITH, which was built 100 years ago this coming summer. The EDITH and its twin, DEFIANCE, rowed by brother Ellsworth, were built out of white cedar planking with white oak framework in Racine, Wisconsin. Brass screws, copper riveted lapstrake. My favorite style of building. The brothers launched in September in Green River, Wyoming, and followed Major Powell's route down the Green and Colorado to Needles, California, arriving in January of 1912. They flipped, wrecked, and wrapped too many times to count but came out with a book that went through 27 printings and a movie that still has the record of the longest playing feature in the history of the world. (It helps to have your own theater and start in 1912.)
I want to see what the boys were up against, so I'll be building the replica over the next couple months to row through the Grand and assorted other stretches next summer. 16'7" long, 4' wide. Should be absolutely horrifying in big water. I can hardly wait. Maybe I can write an e-book that goes through 27 downloads. 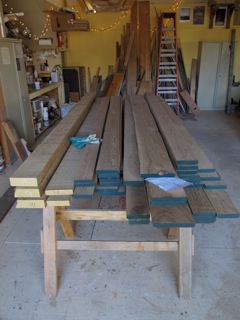 The original boats cost $450 for the pair. I'm in $2000 just for lumber for one so far. A tad of inflation, I guess. Here's the pile of white oak for all the ribwork, chines, and gunwales. The white cedar is in some freight depot in Vermont, abandoned by grumpy teamsters who think it's too long and heavy to move around. I guess I should send them a case of beer or something.
Posted by brdfrd at 9:48 PM No comments:

I've been thinking about some sort of blog for a while. Here goes.
This blog will most likely be about Grand Canyon boating: my history there, the boats I build and run and flip and wreck there, the historical characters who have been through there that sometimes inhabit my books. But I will doubtless range further afield. Other boats, rivers, oceans, characters. Random thoughts. Particularly bad ideas. So forth.

I did a little blogging during the last year on Wooden Boat People. Here's a link:
http://westcoastwoodenboats.ning.com/profiles/blog/list?user=1kiq88t7k9yab
This shows the building of three dories in my boatshop. I'll continue to share some of the more arcane boatbuilding posts there, so there may be duplication if you're looking both places.