Ah the roller coaster ride of traveling. Gotta love it. Or hate it.
Yay, all packed and ready, with free baggage included with my new credit card.
Boo, American Airlines says no free bag--take it up with your credit card company.
Yay, walked through the metal detector with two fake knees, no problem.
Boo, stuck on the runway for half an hour.
Yay, nice new jet--smooth ride to Phoenix.
Boo, I'm in Phoenix for two hours.
Boo, I'm in group 5, so will probably not have anywhere to stash my carry-on.
Yay, they will check it for free.
Boo, I forget to take out my sunglasses (foreshadowing)
Yay, me and another big guy are sharing three seats. Room to spread out.
Boo, a Much-Larger-Than-Either-Of-Us-Woman wedges between us, and spreads out.
Boo, a long, painful, nearly sleepless night.
Boo, no coffee or juice on the plane.
Boo, a half hour wait for bags.
Boo, a forty-five minute wait for my shuttle.
Boo, another forty-five minute wait for my rental car.
Yay, As a consolation for the long wait, Jimmy gives me my choice of any car. I take the Buick, because it sounds like how I feel.
Boo, it has Jersey plates. Once again, I get to be a joik from joisy.
Yay, there's a coffee shop right here on the street with parking.
Boo, the sun is out and I find out--yup--my sunglasses are smashed.
Yay, Foster-Grants are on sale two-for-one in the Walgreens.
Yay, I make it out of Boston accident free. 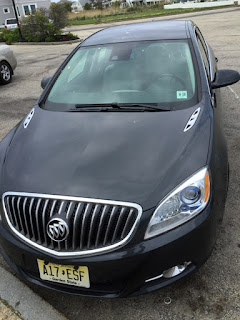 Pilgrimage: to Plymouth in a Buick
I'm taking the back-road roots-route to Cape Cod today in order to follow my ancient heritage. Elder Thomas Dimock, my great-to-the-seventh grandfather landed in the good ship Hopewell in Massachussets Bay in 1635, and settled briefly in Dorcester, now a district of south Boston. I wonder if they talked like the Car Guys back then? Or how that came about. Seriously. But I don't slow down here to explore--it’s yucky.

On to Hingham established 1636, where ETD established himself that same year. I bet there was no Trader Joes or Bed Bath and Beyond then. There is now. Finally out of the wretched roads, traffic, and clutter of Boston and into arching trees. Then on to Scituate, where he scituated himself around 1637. They have a nice lighthouse here. 75 years afte ETD was here, two noisy young women with a drum and a fife scared off a British invasion in the dark of night. Awesome move. Fist pumps on that one I bet. 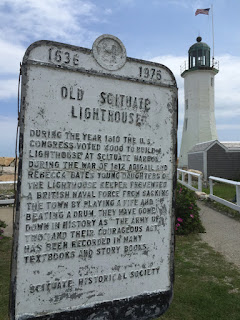 A little further south I stop in Plymouth to see the famous and somewhat controversial rock. Turns out no one mentioned the rock for over a hundered years after the Pilgrims landed and the entire story is based on the recollection of a 90+ year old man who knew some pilgrims. And boy, is it an underwhelming pebble of a thing. 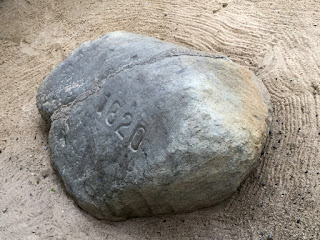 They have a very cool replica of the Mayflower in the bay there. What a wacky looking boat. All the pilgrims today are elementary-school kids without the cool pilgrim outfits. But I did see four wild turkeys just outside of town. 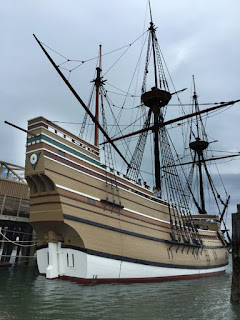 Then on south to the biceps of the Cape Cod peninsula, Barnstable, where Elder Thomas Dimock helped set up town and continued on as a major player for many years. According to a few obscure websites, there is a rock about a mile east of the courthouse in his honor, with a plaque reading “This Boulder is Erected as a Memorial to Elder Thomas Dimmock who with Rev. Joseph Hull Received the Charter for the Land Now Occupiedby the Town of Barnstable. On This Knoll He Built a Fortification House in 1643.” I spend an hour or so hunting for it with no luck. 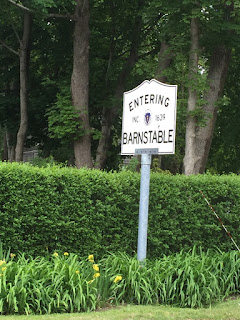 But it's comforting to know my bloodline got in on the original theft of lands from the original residents. Well, actually, when you go back that many generations, it turns out ETD constitutes less than one five-hundredth of my heritage. Of course there was some inbreeding along the way, so maybe as much as one percent. But hey, it's the name--that patrilineal hokum that counts, eh?

Another cup of java and I head on down to Falmouth to meet up with some friends of old friends.
Posted by brdfrd at 3:26 PM No comments:

I just got back from my second Grand Canyon trip of the year in Cataract, my old Briggs dory. Cold and rainy--we called it Mayuary. 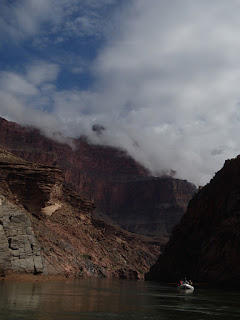 I managed to avoid wrecking Cataract this time but did manage to break one of my beautiful hand carved oars just as I was making my pull to the left in Unkar Rapid. That resulted in a pretty wild, though damage-free, ride down the wall as I was switching in a new oar--something I haven't had to do in decades.

Scott's video from the back seat

The next morning I decided to keep the other new oar as one of my running oars, because after two-and a third trips, they had proven themselves. Perhaps the snapping oar was a fluke.

Nope. first thing in the morning, upon entering Hance and beginning my pull to the left, the other one snapped. Amazing. But my oar switch was way quicker this time. Odd that they both went within five miles of each other in deep-water pulls after five hundred miles of hard pulling. I guess I'll make future spruce oars a bit thicker. 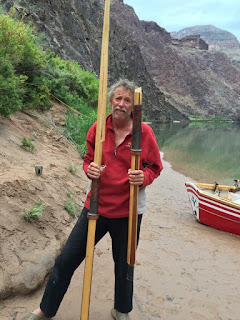 Not too much else to report--here are two shots from the first trip: here we are helping rescue a raft that went over in Lava--towing them to safe deep water for the roll-over. 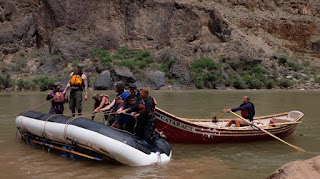 And working on a new appetizer recipe (thanks, Cheryl, for these last two photos): 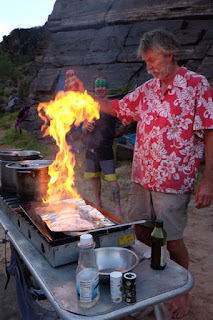 Sunday night I fly to Boston and will spend a few days perusing the wooden boat haunts of Cape Cod, Martha's Vineyard, and Nantucket. If anyone has any hints of not-to-miss haunts, let me know.

Then up to WoodenBoat School to assist Wade with a two-week Fundamentals of Boatbuilding course.

GOOD NEWS! There is still room for you to sign up. Tell them you're my friend and you get a 10% discount. WoodenBoat School is about the funnest place I know. Click here and sign up now--you will never regret it:
Fundamentals of Boatbuilding

I can hardly wait. Then it's off to Mystic Seaport for the annual WoodenBoat Show.

Back to Flagstaff July 1 and 2, then up north for our Loma - to- Hite Upper Colorado River Dory and Music trip. We'll see a ton of scenery and run the rapids of Westwater and Cataract Canyons. And have a lot of fun in camp too.

MORE GOOD NEWS! There's still room on that trip too. Sign up today. We are getting more rain and cold weather up there now to keep the flows up for our dainty boats. Must be all the clean living. Click here and join us--it is the bottom trip on this page:
Upper Colorado Dory and Music trip

Don't say I never invited you to have a good time! See you there?
Posted by brdfrd at 3:08 PM No comments: