Edith launched on Lodore on May 26 for a four-day run through Lodore and Split Mountain Canyon. The power plant at Flaming Gorge was spinning as fast as it could ast about 4600 cfs. (Although they have since opened the spillways and ramped up to about 8000.) O.A.R.S. Inc was gracious enough to add me as crew (interpreter / storyteller) on a small three-passenger trip. Weather was cold and a bit rainy, but my gourd, it was beautiful up there. 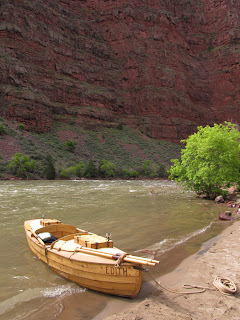 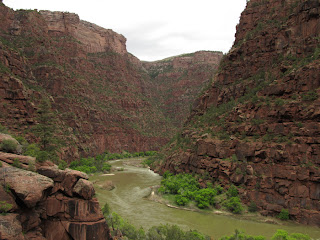 Edith put up a fight in most rapids, not really wanting to pivot when I wanted her to, but in the end, we came through pretty much unscathed. I did rumble a rock in Hell's Half Mile, but there were none of those crunchy crackly sounds and no visible damage. Here's a link to my run in Hell's Half Mile, with my bone-head move toward the end, jarring the camera.

Edith in Hell's Half Mile

After the Yampa boomed in we had about 23,000 cfs--the largest water Edith has seen. Split Mountain Canyon was huge.

I did two dory runs on the San Juan, before and after Edith's Lodore run--fantastic river, great folks, good water, great weather, fun music. I am back home now, about to give Edith a nice rub-down and rest for the summer.
Posted by brdfrd at 4:38 PM 1 comment: