In my last post I was reveling about my knee surgery recovery. Woohoo! Two days later I had a hernia. Who is writing this script? Surgery four days later and back to recovery mode.

But the doc said I could putter in the shop as long as I don't lift anything, so it's been back to puttering and helping BJ get the Thunder River done. Decks on and primed. 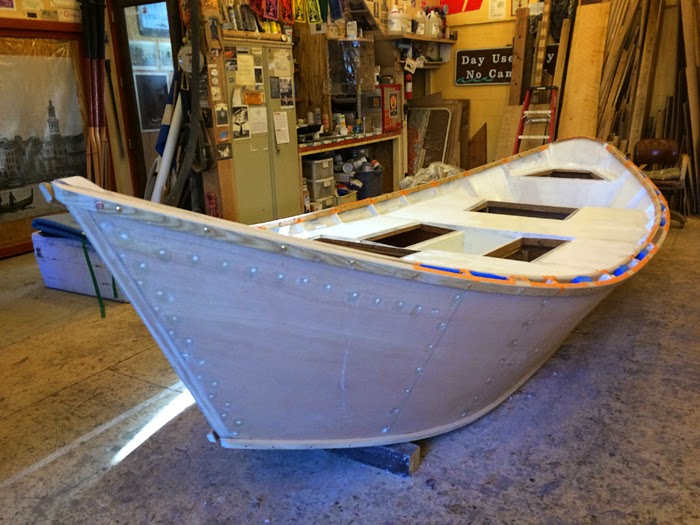 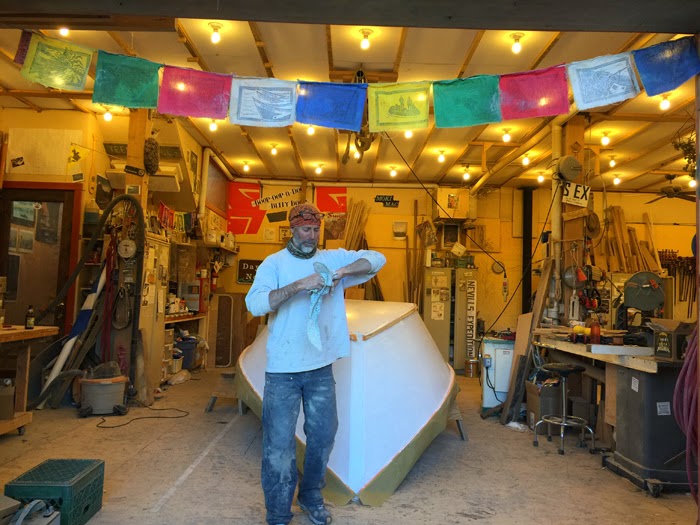 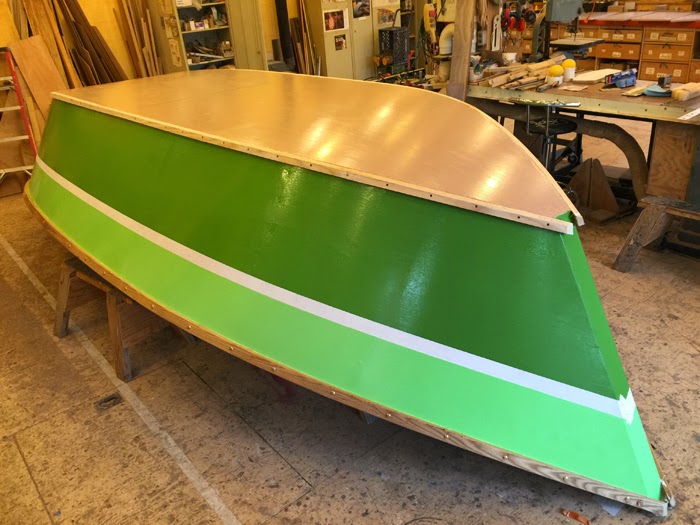 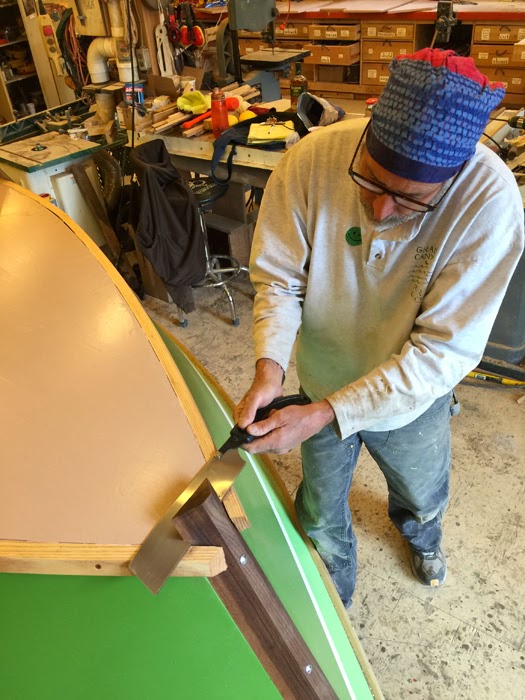 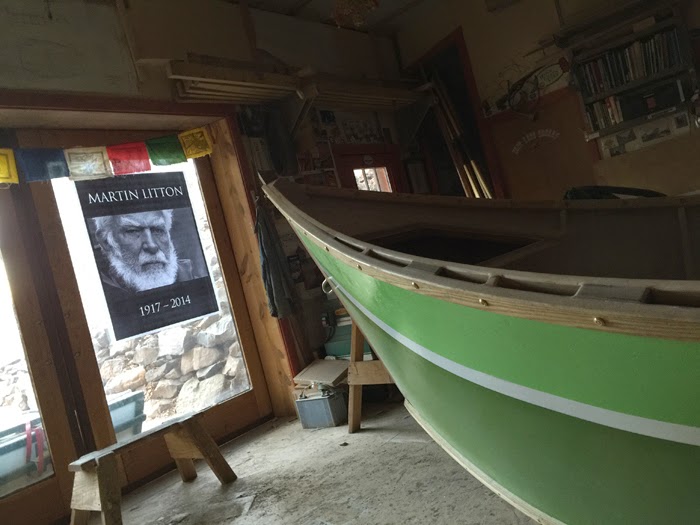 Pinstripes or no? Yo. 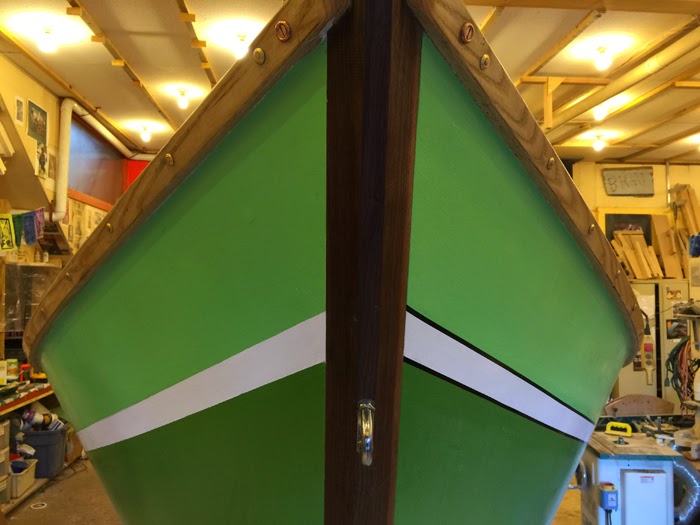 Hatch hinges temporarily fixed with 5-minute epoxy--long enough to get all the screws in the right place. 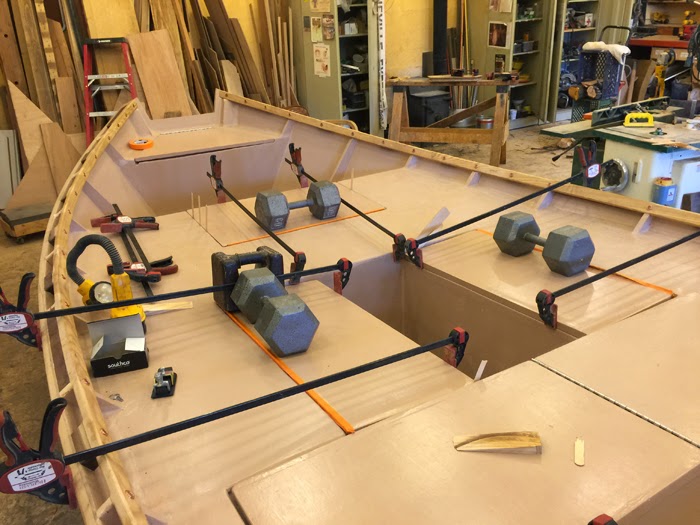 But how to precisely mark latch placement from the inside? Find a friend who fits in a side hatch. (I am already getting orders for this revolutionary hatch accessory.) 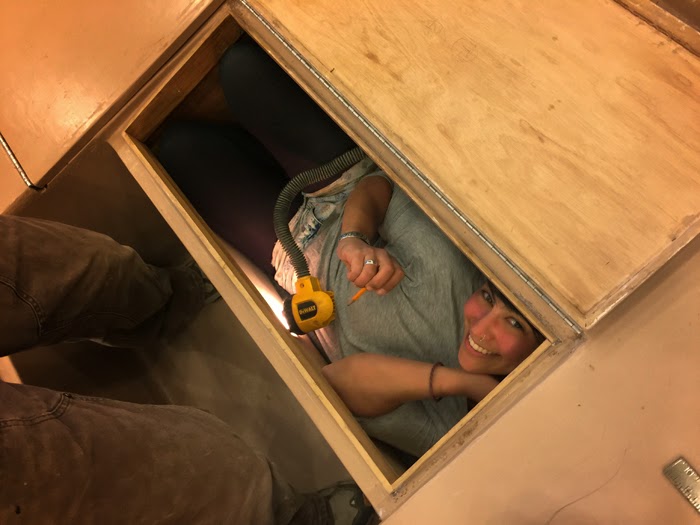 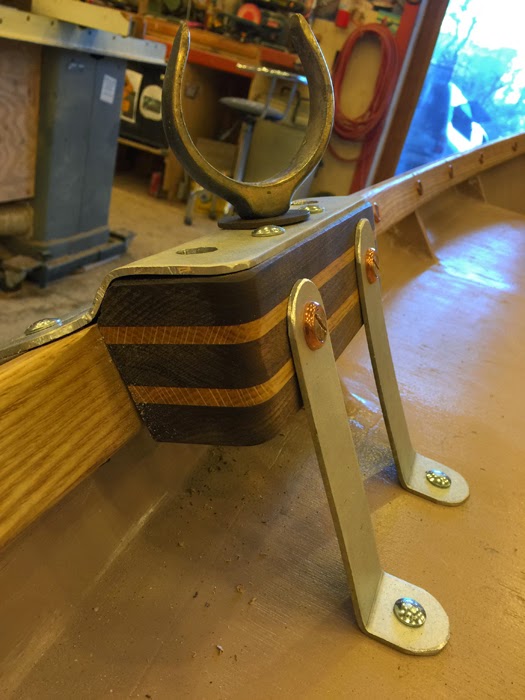 Enough of this nonsense. Off to Lake Mary for a sunset champagne inaugural launch. Roy and Amy brought out Brown Betty to help celebrate--another Fretwater boatshop baby from last summer. (Roy built Brown Betty, for the most part, while I was on the river last summer, so other than a few appearances in last April's blog posts, she escaped documentation here. She is the second clone of the Betty Boop, which we rebuilt from a rot-pot back in 2011-12.) 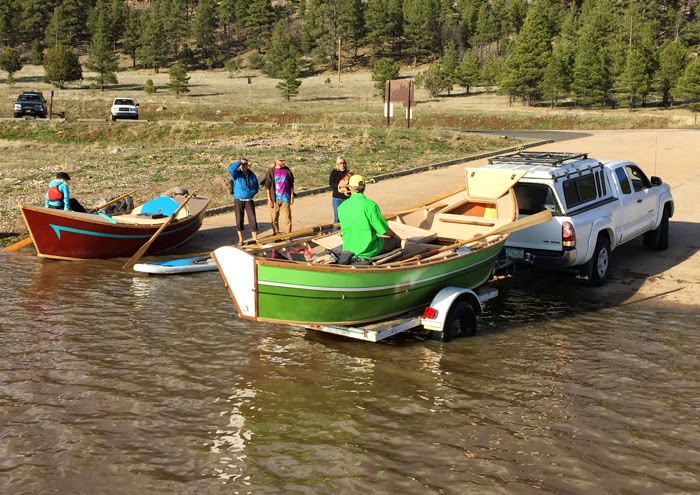 She floats. She rows. 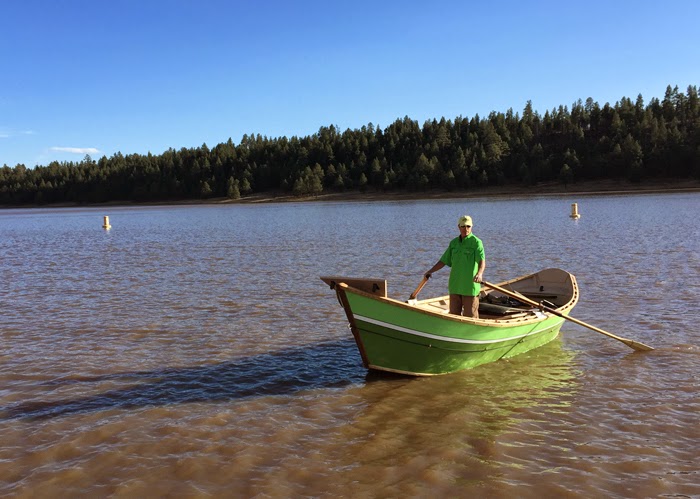 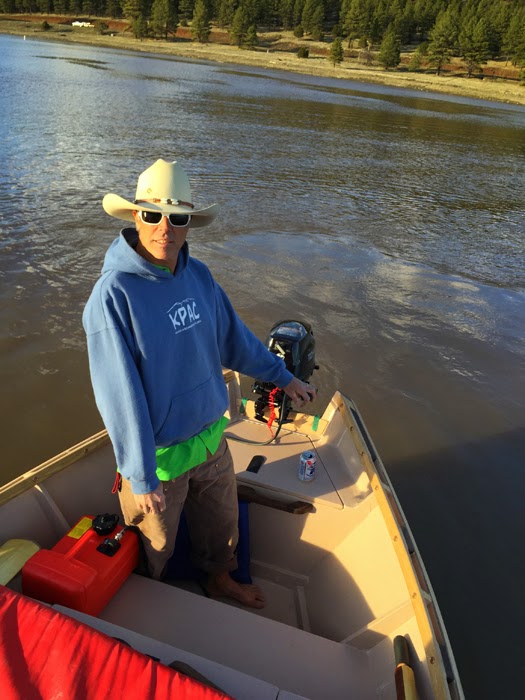 She knows how to party. 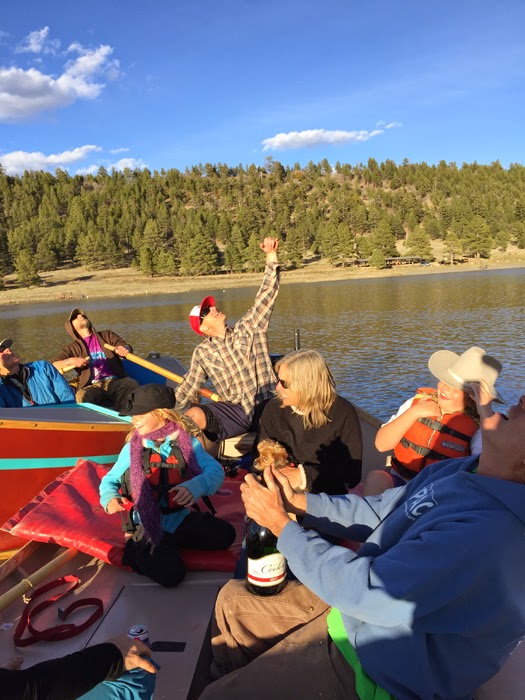 She even finds her way home by the fingernail moon. 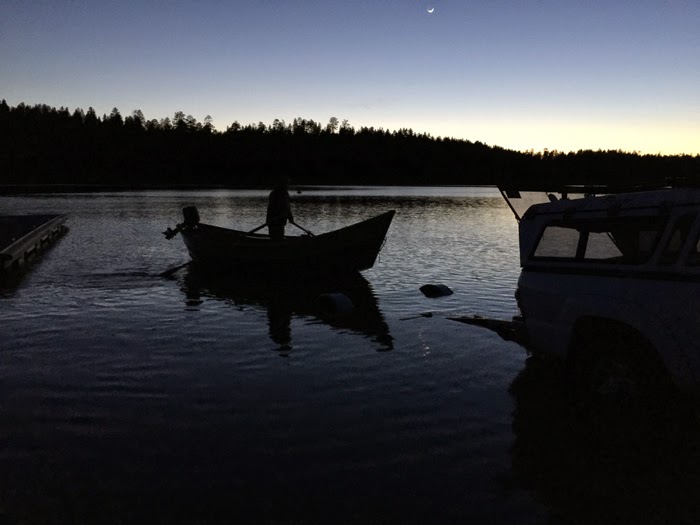 Posted by brdfrd at 9:29 PM 2 comments: Links to this post

I got my marching orders from Dr. Tarlow on, appropriately, March 4th.  He feels the residual pain will soon subside as I continue exercise, therapy, and muscle-building. (Arnie is still kind of cranky; Lenny is pretty pain-free and strong.) And he was quite happy with the range of motion, strength, and the x-rays. And of course it still hurts: I just had knee surgery a few weeks ago. Stop whining. March forth.

The financial adventure continues to improve. Of the $160,000 that the initial Blue Cross statements seemed to indicate I will owe, it now looks a lot more like about $3000. I can live with that. But it is the most bizarre, arcane system I have ever been a part of. They are now sending me checks which I have to deposit and write checks to various entities--the Surgical Center, the Physician's Assistant, etc. I'd explain further but it's really kind of boring.

And if anyone wants to geek out on my before and after x-rays, here they are. The back view really shows why the pain was so annoying. Those interior contacts were really starting to do that pesky bone-on-bone thing. And the first two pairs of images really show the bow-legged to straight-legged transition.

Posted by brdfrd at 6:09 PM No comments: Links to this post

On my feet again

Damn, I can't say I have really enjoyed dual knee surgery all that much. An adventure for sure, but it has cut severely into my shop time, which is not acceptable. An hour or two a day has been about tops for the last six weeks.

But things have been happening down in the shop, and I stagger down now and then to kibitz and get in the way. Lora has been finishing up a new five-string neck for her beautiful old Vega Whyte Laydie banjo. It's the opposite of boatbuilding in terms of scale, and a bit hard for me to adapt to. But check it out: We inlayed a bunch of turquoise heishi beads into the ebony fretboard, and are now finishing up the head and nut. Thursday was a big day, as Lora hoped to be playing the banjo Friday evening in Phoenix. Time to, as my mom used to say, "get a wiggle on." After much deliberation about precise placement we went ahead and drilled in all the tuning peg holes and screwed them in. 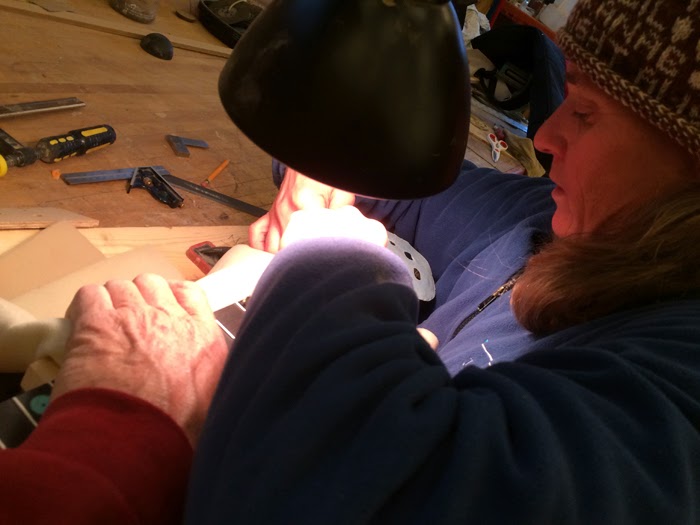 Here is Lora filing the string notches into the nut. 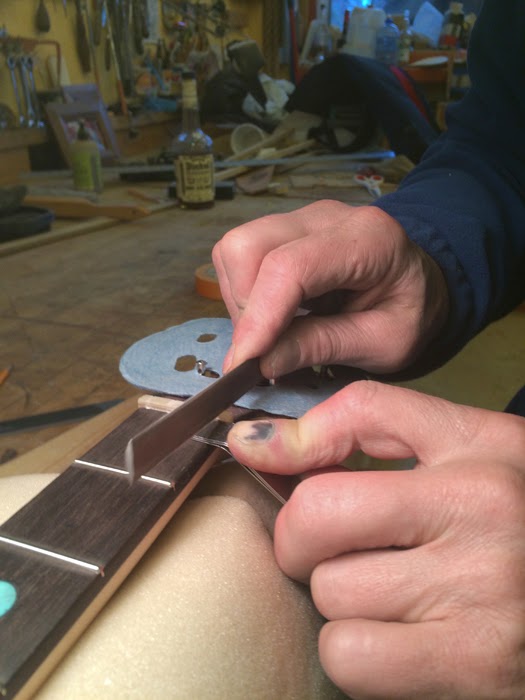 We put in the silver stud that holds the fifth string in place, affixed the tightening hardware inside the pot and oiled up the neck. And by god, it was suddenly time to string it. 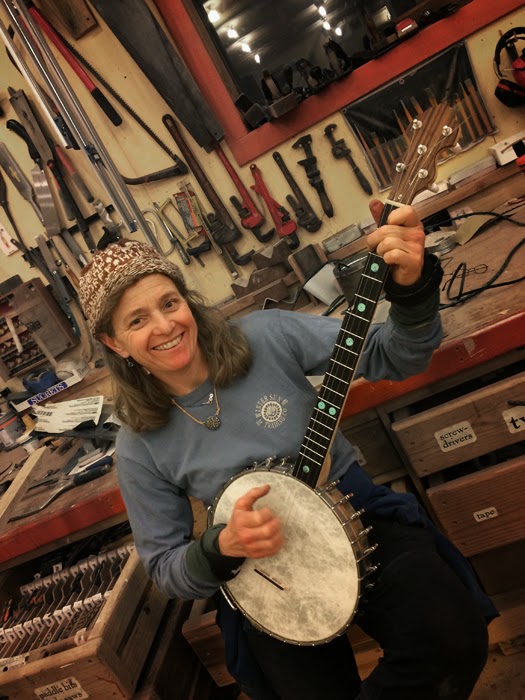 It sounds pretty amazing, and she made it to the music gathering on time. She said it wow-ed the other banjo players. And the banjo makers!

Meanwhile, BJ has been busy on the Thunder River, when he isn't skiing or surfing or flying his paraglider. The duties of a retired ski patrol director are vast. Here I am helping a couple weeks ago. 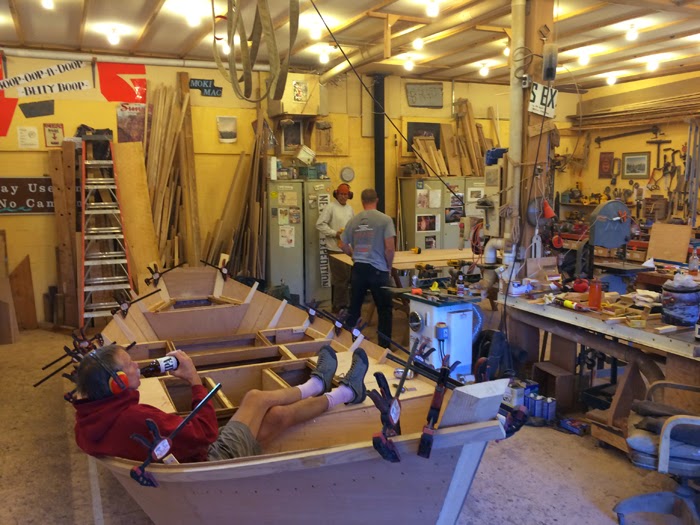 The decks are all in place now and we have glassed the seams where the deck meets the hull, as Jerry Briggs did to the originals.  That's about it for fiberglass on this boat--at least until a few years go by and a necessity develops. Or not. The old Briggs boats made it close to twenty years without fiberglass, and that was with fir plywood that checks horribly. Meranti mahogany plywood should do far better. 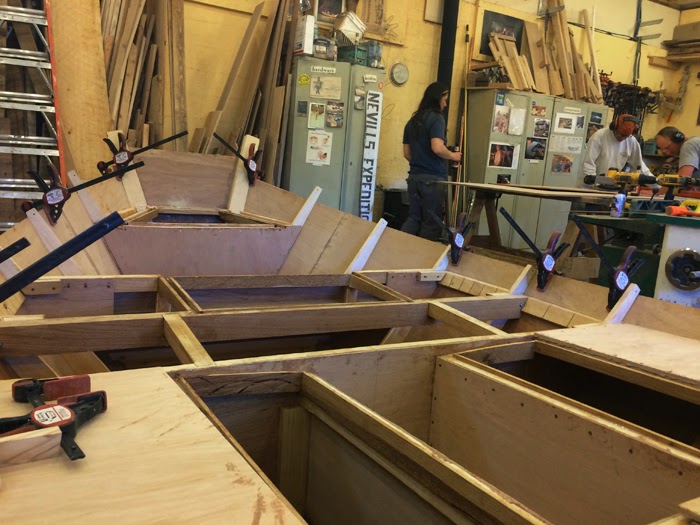 On Saturday I figured I could hobble down and get BJ started on prep for installing the gunwales in a day or two. But things got out of hand. By mid-afternoon we were gunwale-ating. By quitting time we had the right ones done.

But who quits at quitting time? Too much mo. Here I am drilling the bolt holes while Deanna eyeballs the angle of the hole (a critical job). BJ is slamming in the sex nuts. 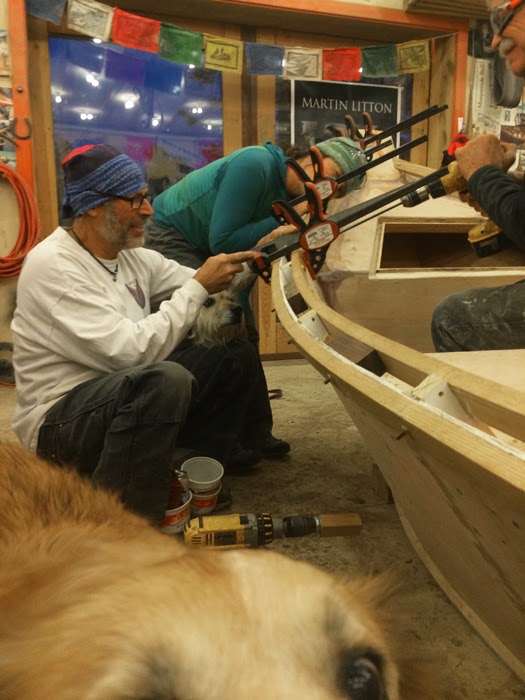 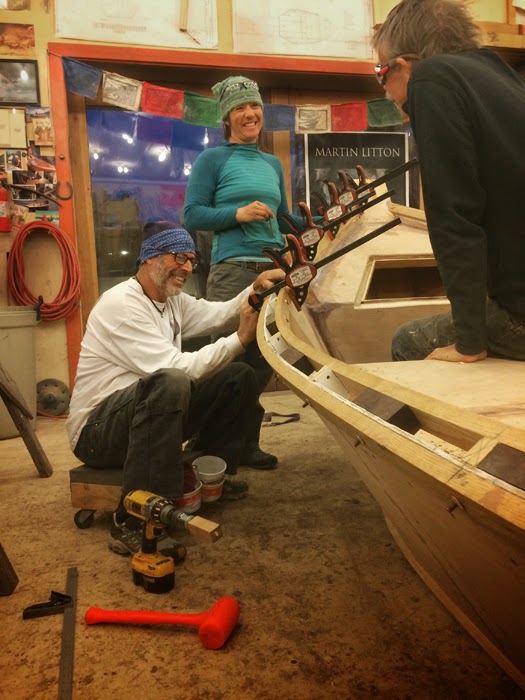 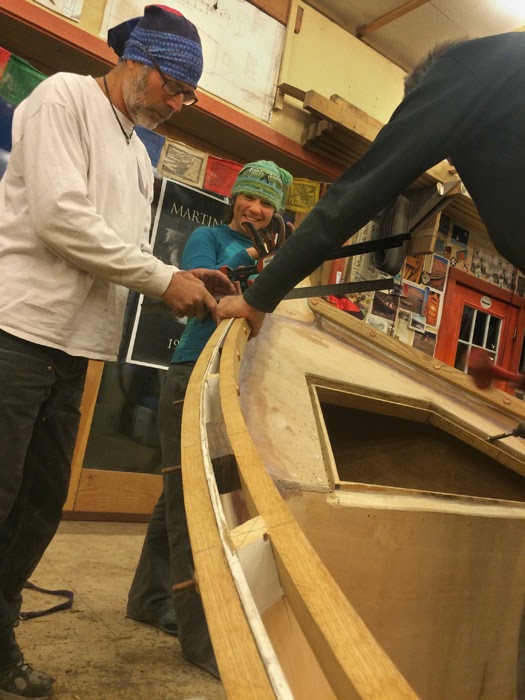 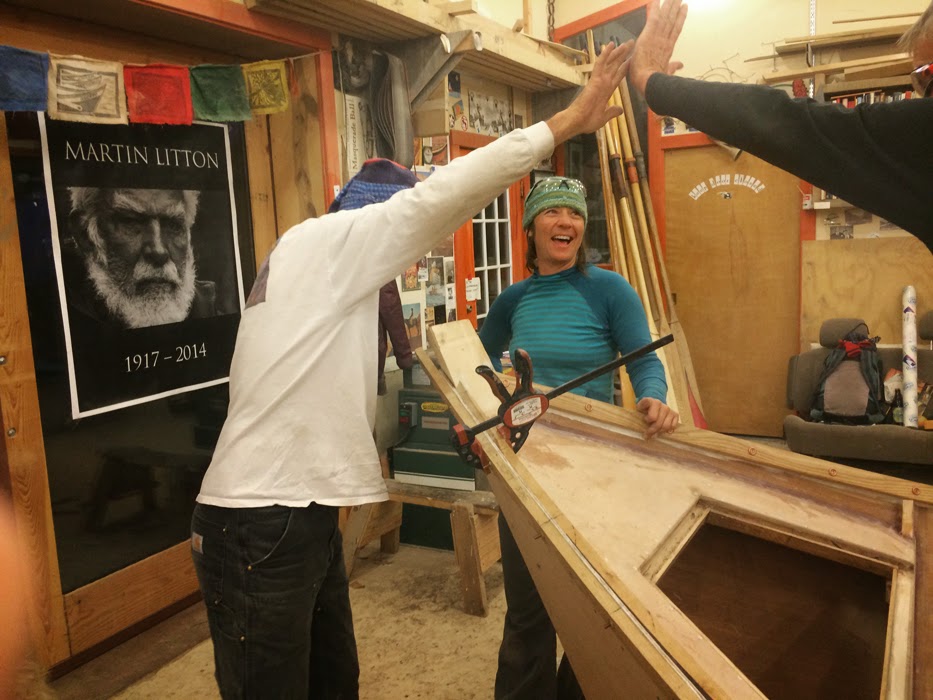 Gotta say, I was excited to see it happen, but far more excited to have just spent my first full day in the shop since before surgery. I'm back! The knees have finally forgiven me enough to let me work a full day. I mean play a full day. Okay, play a full half-day and half-night.

It's well past dinner time but I gotta saw that bow post off. 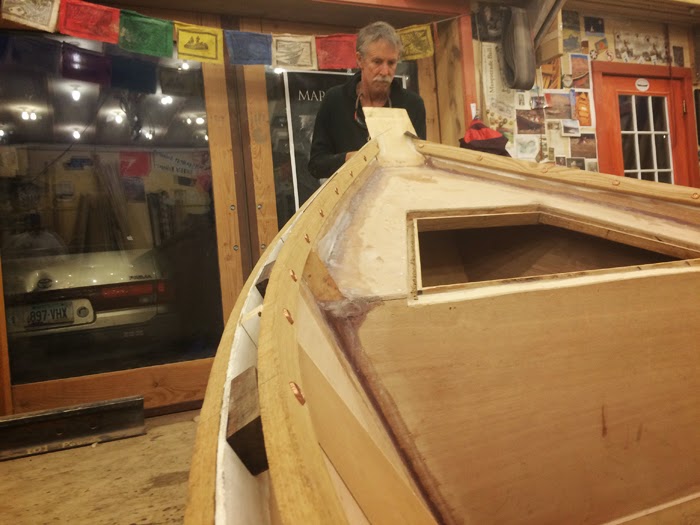 Posted by brdfrd at 10:35 PM No comments: Links to this post