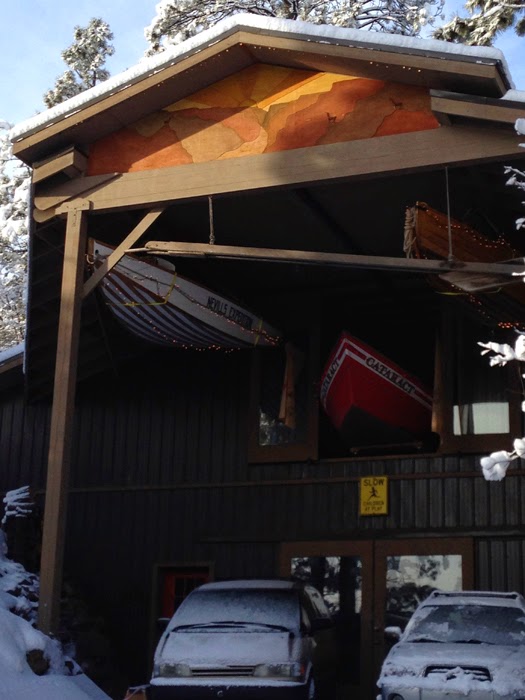 In April Fretwater Boatworks will be hosting two seminar / mini courses. I'm starting what I hope will become an erratic and unending series of low-cost short courses and seminars to help infect more victims with the incurable estoteric disease of wooden boats. Most boat schools cost well over $100 a day and are still a bargain. For these first two courses I'll be asking a per-day donation of around half that--maybe a little less if its just me instructing, more if we are bringing in talent to teach. Do what you can, and hopefully it will work out that we can continue to do these. These will be more informal courses than you might find at a "real" school, but also more flexible and personalized.

April 10-13
Oar tuning: making your oars not hate you 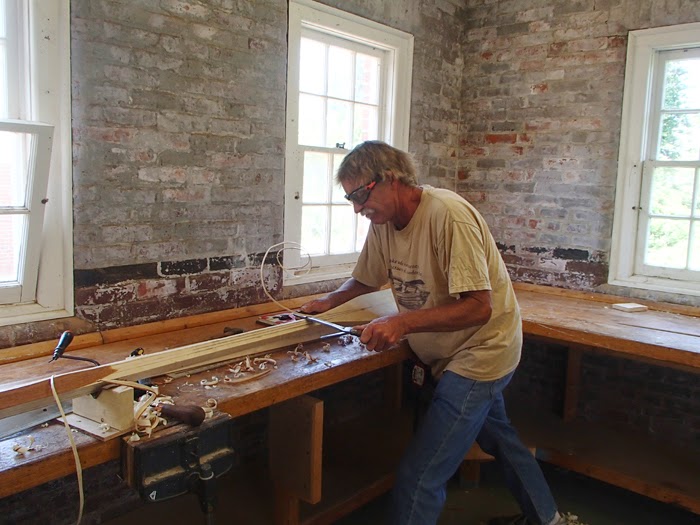 The classic, balanced, workingman's oar is a thing of the past. Modern wooden oars are almost without exception heavy, stiff, poorly balanced things that, when used commercially, lead to wrist, elbow, and shoulder fatigue and misery. The market seems to demand heavy bludgeons that are hard to break--but they end up breaking you. Oar authorities Pete Culler in 1978, and Andrew Steever in 1993, both bemoaned the fate of the oar market even then, saying it had been decades since a good rowing oar had been manufactured. It has not improved. A light, balanced oar with true dynamic flex just does not exist. As the years go by I have been tinkering with ways to make oars more user friendly, visiting oarmakers around the country and the world, and taking an oarmaking course from Clint Chase at WoodenBoat School. I've come up with several techniques and procedures to help you and your joints prolong your bad habit of rowing. Shaft and blade thinning, re-tapering, blade scalloping, mild handle counter weighting, ultra-light oar tip protection, minor shortening, and slick leather wraps. Coworkers on the river are gobsmacked with some of the oars I've been running the last couple years. So am I. We'll be working all these angles throughout the four-day course. Bad-ass surfboard shaper Greg Loehr will be on hand to help share the professional shaping aspects of blade work. 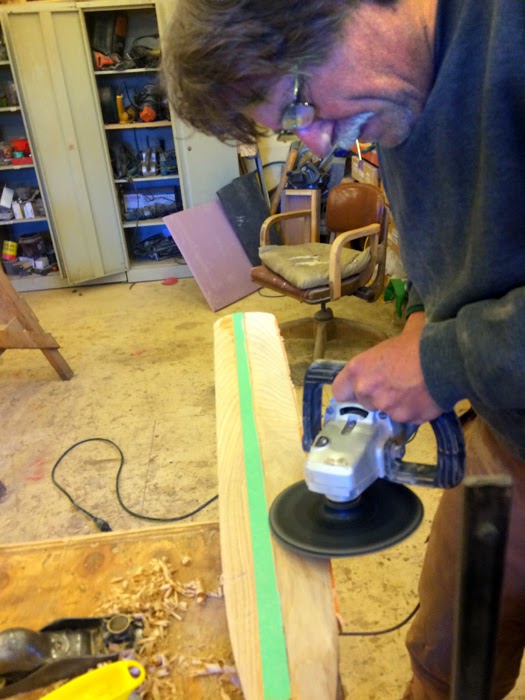 Before signing up you should let me know what sort of oars you are starting with and where you want to go with them. Not all oars are conductive to modification. My shop is big, but oars are long, so let me know now if you want a spot.
Here's a radio story Scott Thybony did on the Fretwater oar quest. 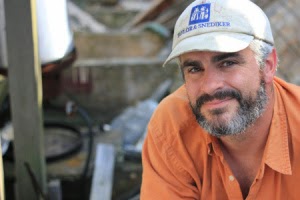 For more than ten years Wade Smith was the Director of the John Gardner Small Boat Shop at Mystic Seaport, curating and documenting the coolest collection of small wooden boats anywhere, and teaching a wide variety of wooden boatbuilding courses. He now works as a professional wooden boatbuilder in Connecticut and teaches boatbuilding at WoodenBoat School in Maine each summer. Wade will be accompanying me on AzRA's Grand Canyon Dories and Stories trip, and has enthusiastically agreed to teach a short course on the fundamentals of boatbuilding before our river trip. We foresee this as a somewhat informal introduction to this age-old craft, with flexibility to move toward whatever the class needs. Since the Great American Desert is a poor place for traditional lapstrake plank-built boats, and since we have limited time, we plan to focus more on the plywood-on-frame style typical of Oregon Drift boats and dories of the mid-1900s. 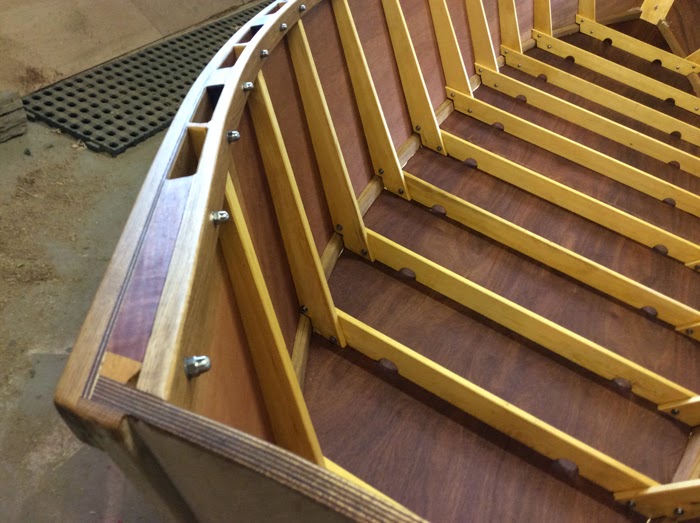 From hallucinating a boat concept, to drawing it up and translating lines to wood to a boat, we'll be pretty busy. Boatbuilding is a continuous dance of problem solving. Expect to learn tricks and techniques that will be useful in far more applications than the precise thing we may be doing at the moment. If you've ever dreamed of building your own boat, this is an excellent place to start turning into your own private nightmare reality. We hope for a course size of ten to twenty, so let me know now if you want to hold a spot. I expect I will learn as much or more than anyone else. 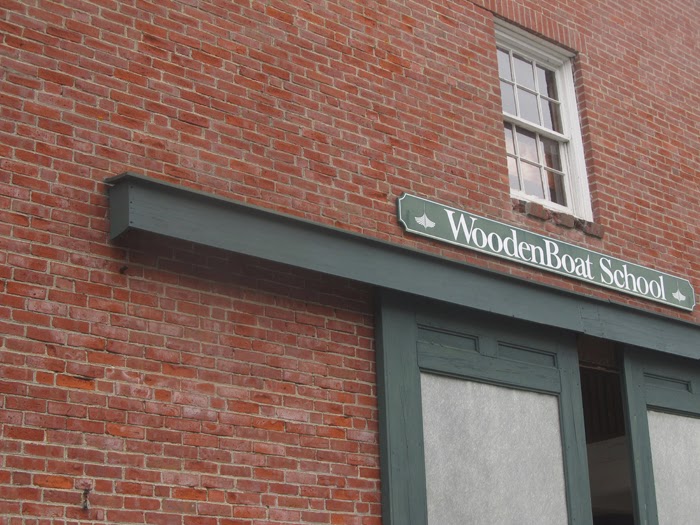 For those who realize four days is simply not sufficient to learn enough about boatbuilding, come on back to WoodenBoat School in Maine for Wade's two-week course in Fundamentals of Boatbuilding. This year he will have the world-famous proprietor of Fretwater Boatworks as his lovely assistant. That's me. We'll be going deep into all aspects of the craft. Your mind will be irrevocably twisted. Tell them that alumnus Brad Dimock is sending you and you'll get a 10% discount on tuition. You can also save a bit by camping, but be sure to sign up for the food—it's outrageous. Warning: WoodenBoat School is addictive. It is just about the funnest place I've ever been. Just thinking of it makes me twitch and giggle. 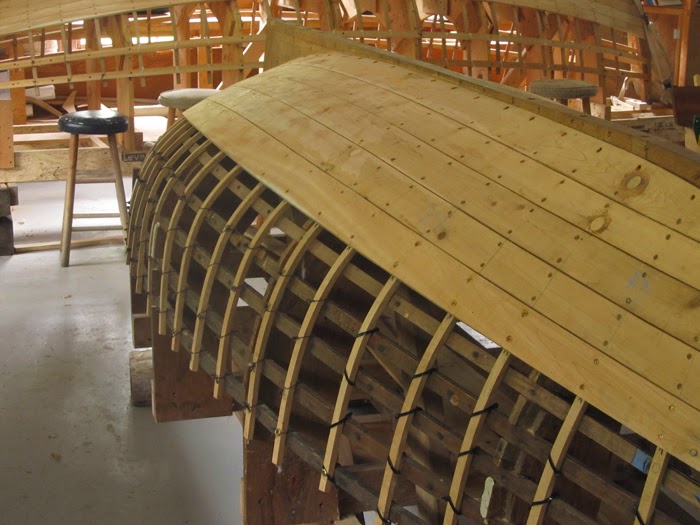 I knew from the start that the surgery itself would be a big adventure, and that my rehabilitation would be an even bigger one. And it has been—the day-by-day painful progress, the occasional backslide and its consequent despair, the dance with the narcotic oxycodone. A big adventure to be sure.

Yet I knew there was going to be a third adventure as well--the financial dance between the doctors, providers, and clinic, and BlueCross BlueSheild of Arizona, and little old me. The adventure began on Saturday when I got a note from BlueCross. Mind you, I HAD called them before scheduling surgery to find out if my doctor was covered (he was) and if the procedure wa covered (it was). Even so, I expected some amount of charges that were somehow going to be not covered. I had looked up the true cost to see just how poorly things might go if something wasn't covered: MAKO Robotic Unicompartmental Knee Replacement @ SurgCenter GreaterPHX-implant included: $21,225." I figured $40,000 max, but more likely well under $10,000 with my insurance. So to be honest, I didn't really expect this. The gist of the letter was, "Just kidding, Brad. That wasn't really covered at all. Fooled you, huh?" And the surgical center forgot to check the doctor's website about the pricing.

Hmm. Patient owes $79,286.88 You know, that really kinda changes everything. I mean... I went into this in good faith. I had a newly upgraded insurance policy with a reputable company, had made a pre-check call to okay it, and had far more in the bank than my deductible, just in case. But not $79,286.88 more than my deductible.

And oh yeah: this is just for the first knee. With in-network and out-of-network deductibles I could be looking at maybe $175,000. Gosh darn it.

The bottom line on my IRS 1040 form has averaged $20,000 for the last five years. I run a pretty thin margin. That's why I have insurance. That's why I checked things out. Maybe if I paid them $100 a month until I am 250 years old? Turns out that even though the doctor and the procedure were fine, the surgical center was not "in network." That's handy. Didn't check that one. When I handed the nice receptionist at the surgical center my BlueCross card before surgery, did she say, "We don't work with BlueCross?" No. She smiled, xeroxed it, and handed it back. And turned away so I wouldn't see her blow coffee out her nose.

So I wandered into my insurance agent Carla's office, handed her the statement. She looked it over, let out a few expletives, and asked a few questions. She noted that several of the charges were double-billed, so only $60,000 was valid. Not that much help, really. We quickly agreed that it was flat out negligence for the surgical center not to inform me they weren't covered. And really dumb. I mean... how the hell do you stay in business? Nobody can pay that kind of dough if they are not insured.

Carla crossed her arms, put on a really scary, mean face, and punched up the surgical center on the speaker phone and leaned back.
"Are you covered by Blue Cross?"
"No."
"When a patient hands you a BlueCross card you you ever inform them?"
"Let me transfer you."

Things went better quickly. It turns out that there is some sort of deal between the noncovered surgical center and the covered doctor which does not show up on the BlueCross statement. According to the gal on the phone, I would be liable for just 20% of the "allowed amount" that BlueCross said they would cover ($1100), making my personal liability $220. Just kidding about the $79,286.88. Carla gave me a wonderful What The Fuck look, got the lady to repeat it, and hung up.

I have a sneaking hunch there may be a few more "Just kiddings" heading my way. Carla assured me we'll go to war if there are. But jeezuzfugginkryst. They didn't offer to cover the staining of my shorts when the first statement came through.